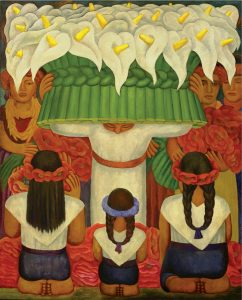 “Art is knowledge at the service of emotion”—José Clemente Orozco

Art in Mexico underwent a radical transformation at the end of the Mexican Revolution in 1924. The new government born of the citizens’ revolt commissioned the brightest artistic minds of the era to create works that spoke directly to the people, celebrating their potential to craft their own future through expanded civil liberties and universal education. The intention was to inspire the masses with the heroes of Mexican history, social justice, and the life and heart of the nation. These three legendary painters were known as Los Tres Grandes—David Alfaro Siqueiros, José Clemente Orozco, and Diego Rivera. Together they cultivated a style and aesthetic that defined the Mexican cultural identity following the Revolution and remains today.

Los Tres Grandes developed a populist iconography featuring heroes from the past, present, and an imagined modernist future. All three believed that art was the highest form of human expression and a key force in social change. A point of agreement with the new government was that the artists would have complete freedom of expression—a radical idea at the time. Their images, featuring Aztec and Mayan warriors, political heroes, common laborers, and humble peasants, were highly visible as epic murals on public buildings, churches, and city streets in cities across Mexico including Mexico City and Guadalajara. Using visionary techniques like fresco, encaustic, mosaic, and sculpture-painting, the muralists developed a new way for our country to see itself, and to swell with national pride.

These three painters had a huge impact on their counterparts in the US as well, and many flocked to Mexico City to study and work with them, notably a young Jackson Pollock. Modernism was, as yet, an underdeveloped concept in the US art world. They inspired the American artists to bravely use their talents to protest economic, social, and racial injustices. It’s not hard to see how the Futurist intensity in the murals of José Clemente Orozco and David Alfaro Siqueiros were an influence on the art of the WPA (Works Progress Administration) during the Great Depression, or how Diego Rivera’s fearless political statements emboldened the painters of the civil rights movement in the United States of America.

Los Tres Grandes, as well as their fellow visionaries Rufino Tamayo and Frida Kahlo, helped to create a distinctive language that is still manifested in the unique and radical style of the Mexican art scene today.