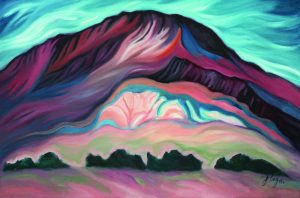 The wind was whipping up in gusts as I drove up the road to Abiquiu, New Mexico. Bold clouds parted to drop sunlight on white cliffs, backed against purple mountains. It had rained the night before and the air was clean and pure. Deep cobalt-blue skies were the backdrop to the layers of color that draped over the mountain crests.

Although I had been to Santa Fe many times over the last 30 years, I had yet to visit Georgia O’Keeffe’s home in Abiquiu and the Ghost Ranch where she spent the summers in her later life. The trip for me was monumental. The high desert of Northern New Mexico is breathtaking. I particularly love the chamiso sage-like plant, decorated with clusters of yellow flowers in Van Gogh like dancing forms. Great cottonwood trees, pines, sage—every level of elegance and tones of green—from the darkest to the bare touch of a dusty green decorate the vistas.

“In the evening with the sun at your back, that high, sage-covered plain looks like an ocean.” Georgia is quoted as saying, and, “The color up there—the blue-green of the sage, and the mountains, the wildflowers—is a different kind of color from anything I have seen. There is nothing like it in Texas, or even Colorado.”

O’Keeffe had a love affair with New Mexico from the first time she went in 1917 and always wanted to return, which she did in 1929. “I climbed way up on a pale green hill and in the evening light—the sun under clouds—the color effect was very strange—standing high on a pale-green hill where I could look all round at the red, yellow, purple formations—miles all around-the color intensified by the pale grey-green
I was standing on.” O’Keeffe,1935 letter to a friend.

Abstraction was in the wind in 1930. O’Keeffe played with visuals in a simplified pared down realism. Semi-abstractions with modeled forms and deep intense colors. Her flower series is perhaps some of her most famous renditions. Closeups with undulating forms and sensual visuals. Although she is quoted as saying it was not her intention to be sexual but rather that you slowed down to see deeply into the image as she had.
The land is raw and vibrant to this day. The views full with shapes and colors unique to this area of the world. O’Keeffe bought her home in 1945 in Abiquiu, where she mostly lived until her death in 1986. Summers she spent at the Ghost Ranch, some 13 miles from Abiquiu surrounded by majestic rock formations and peaks.

“Black Rock with Blue” is one of her stunning landscapes paintings. The smooth, rounded rock forms fill the canvas nearly touching the edges at either side. Black rock, white ground, blue sky—three simple colored shapes. The painting hangs on the end wall of her studio in Abiquiu. She is quoted as saying, “I felt that I had done what I wanted to do in it. I don’t always get what I try for you know.”

I returned from my trip this year with the intent to pay homage to her in some way. To use my photographs and her work as inspiration for a body of work in the gallery. I am sure I have not done justice to her creativity. I know her work from the museum in Santa Fe and the lines are clean and painterly. My work often has layer upon layer, and soft fuzzy edges.

I often work with dry brush as if it was chalk. So, in many ways we do not compare. But, perhaps the fact that I came to Todos Santos alone twenty-one years ago and felt this was the next Santa Fe, New Mexico, and was one of those making the art scene in town happen, I may be compared in a small way, to her. My artistic independence. Perhaps my desire to paint out of the box of realism and more into abstraction with bold colors and forms as well as brush strokes. I strive for a loose playful approach while casting light and shadow in a dance on the canvas. “Not always,” as O’Keeffe was quoted, “am I sure to hit the mark.” I am always working to develop more painterly skills while letting a spontaneous flow emerge. Now as a small body of work emerges from me with a homage to her, Georgia O’Keeffe, I hope to touch something of her soul.